February is going to be a Common Energy filled month! Get ready:

UBC’s Got Skills: Make Your own Raw Snacks 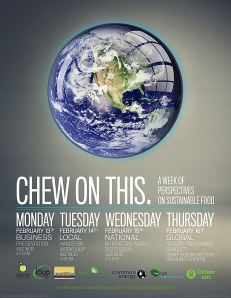 Term two is packed full of events so make sure to save all of the dates! Check out our events listing here: TERM TWO CALENDAR.

See you out at one of our teams’ programs soon!!

Calling all Post-Secondary Campuses! Do you:

1) Care about waste reduction?
2) Want to see composting become a bigger part of your campus culture?
3) Enjoy song and dance in the name of a healthier planet?
If you answered yes to any of the above, your campus should prepare for the GoBeyond Compost Mob Showdown!
What is a compost mob you ask?
Last semester, Common Energy UBC members designed and executed a flash mob in their Student Union Building, to raise awareness about the compost facilities available at UBC. Here it is:
So what’s the showdown?
Common Energy members were so enthused about this flash mob experience, we thought it would be fun to challenge other post-secondary climate groups to hold their own compost-themed flash mobs, and then compete for the most views after the fact. It’s a win-win situation; your group gets to have a little adventure together, and the more people we have viewing these videos, the wider we can spread the message about composting!
Logistics:
1) Feel free to use our raps (or create your own)
2) Host your flash mob and have the video uploaded by the end of January to participate
3) We recognize UBC’s video already has some views; we will only count views of our video from the day that the first other video is posted. (ie if UVic is the first other campus to post a video and does so on Jan 21st, the competition will start on the 21st)
4) We will run the view count until the end of February, and the winner will be announced at the beginning of March, to much fanfare, celebration and increased composting!